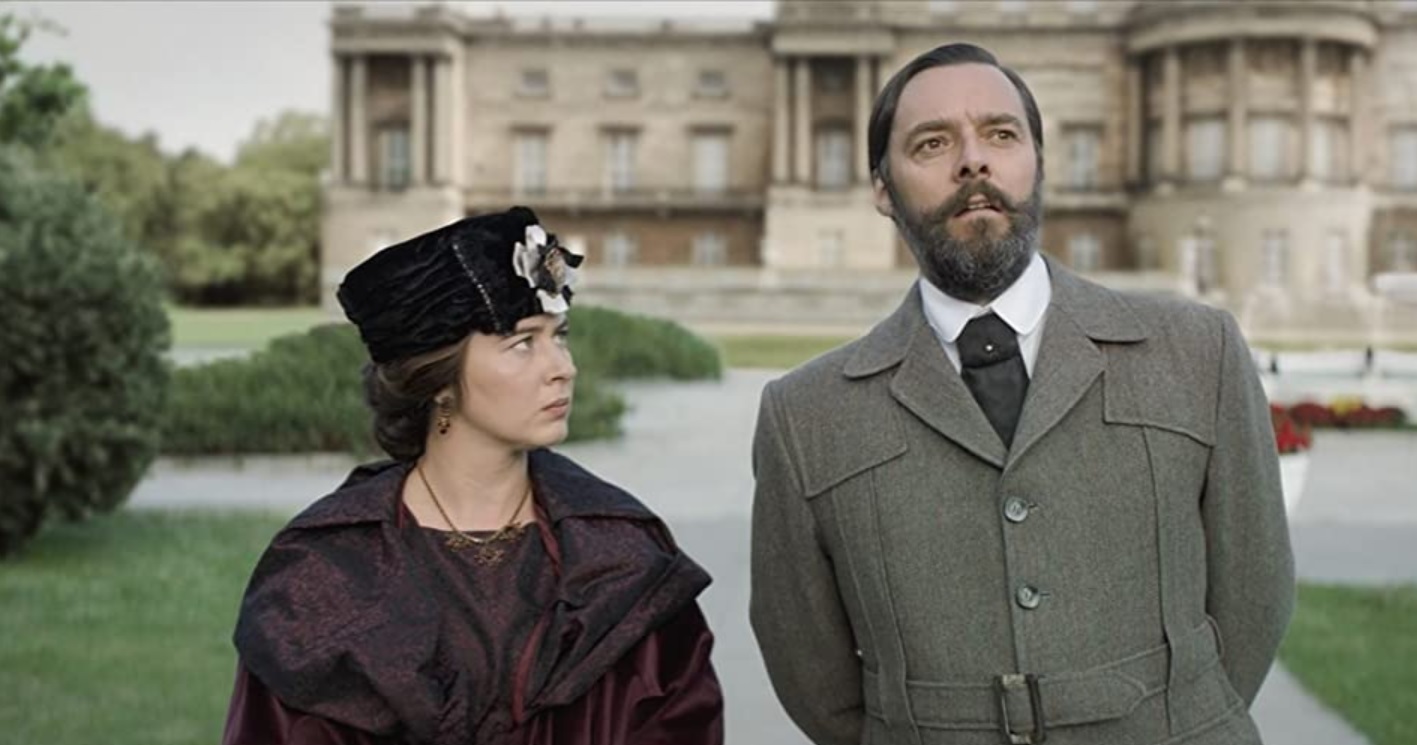 Alexis Cahill’s biopic is a sumptuous surface-level look at Queen Marie of Romania’s impact on the negotiations leading up to the Treaty of Versailles—which wrapped up the first World War in 1919.

Promised by its allies to have all its disparate historical territories united at the conclusion of the war, Romania has been devastated by German occupation. Despite passionate pleas by the prime minister at the peace talks, none of the major players (Clemenceau of France, Lloyd George of the United Kingdom, and Wilson of the United States) can be bothered to lend an ear, much less lend some aid.

So, Queen Marie (Roxana Lupu, a veteran of royal portrayal), granddaughter of Queen Victoria, hops the royal train to Paris to lobby on her country’s behalf.

The attention to detail in the costumes, interiors, and settings is divine. It’s a joy to sit back and luxuriate in the opulence while historical personages debate national boundaries wearing haute couture in a variety of fancy reception rooms decorated by an almost ridiculous amount of freshly-cut flowers.

But once the delight of the visual treat starts to get old, there’s not much here to hold the attention.

We are frequently told of the sacrifices the Romanians made during the war and of the hardships they are currently suffering. But without grounding in the experience of a specific character, it’s a lot of tell with no show. (In fact, the film’s intro is several minutes of black and white footage with a voiceover summarizing Romania’s involvement in the war that’s more reminiscent of an early 2000s Biography Channel program than a feature film.)

We don’t get why a united Romania has any meaning for the people. We just have to take the well-dressed lady at her sometimes wooden word.

There’s also the issue that the story is overloaded with potential conflicts and character arcs that don’t seem to go anywhere.  There’s some sort of marital difficulties between the king and queen and a hint that Marie is having an affair. The heir seems to hate his mom and is conducting an affair with a woman who is unsuitable for reasons that are unclear. And more or less everyone tells Marie that she should probably just stay in her lane and focus on her clothes, children, and social engagements and stop with the politicking already.

I imagine all of this plays better for a Romanian audience for whom the history, characters, and subject matter are familiar. As an American with a very tenuous grasp on WWI and Eastern Europe generally, I found the film to be a pleasant enough introduction to an interesting person, but one that would have benefitted by sacrificing breadth of coverage for depth of character development.