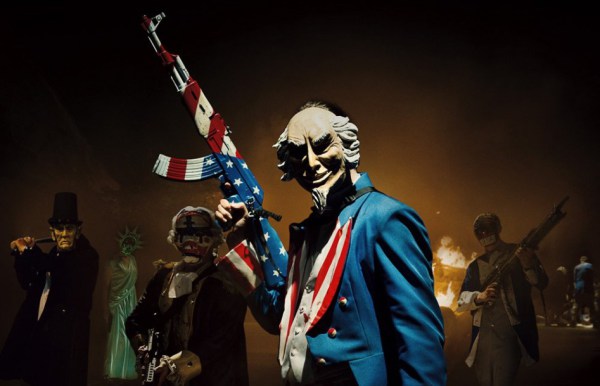 America is having one pretty insane election year. The conservatives’ Presidential candidate is the wacko, egomaniacal figurehead for a party bent on feeding the bloodlust of its citizenry to protect their own wealth while thinning the herd of those Americans it deems unworthy.

Oh, also – The Purge: Election Year is out this weekend.

Writer/director James DeMonaco returns for the third installment in his trilogy of cathartic blood sport – a phrase that describes both the act of watching the series and DeMonaco’s plot.

In 2013, the filmmaker ushered forth a home-invasion movie based on the intriguing premise of a not-so-distant America that embraces a government-sanctioned (encouraged, even!) yearly celebration of lawlessness.

DeMonaco returned last year with a sequel that took the analogy to the streets, digging deeper into the racial and socio-economic message he flirted with in the original. The third installment follows Presidential candidate Senator Charlie Roan (Elizabeth Mitchell), a purge survivor running on a platform of ending the bloody celebration forever.

Never a fan of subtlety, DeMonaco throws every piece of contemporary political filth at the screen while leading this franchise to its reasonably logical conclusion. Murder tourism, entitled teens with a hunger for gore and chocolate, one-percenters literally worshipping at the altar of death, religious zealots preaching the divinity of slaughtering the under-privileged and the women who would defy them – you will find it all.

Though the story moves with the Senator and her chief of security, Leo Barnes (Frank Grillo, returning from The Purge: Anarchy), the film only finds its anchor with a trio of regular folks trying to survive the night.

Mykelti Williamson owns every scene as Joe Dixon, a deli owner guarding his business from the rooftop with his shotgun and his loyal employee Marcos (Joseph Julian Soria). Filling out their group is Laney Rucker (Betty Gabriel), a badass from the neighborhood who prowls the street in a reinforced van offering medical aid.

Considering the overt racial tensions that fuel DeMonaco’s script as well as the yearly purge, it’s appropriate that the strongest characters be those of color; it’s unfortunate that DeMonaco relegates them to support.

A mish-mash of ideas stolen from other, better films as well as Fox News, the effort amplifies the lunacy of the current political climate, reaching a level of hyperbole and mania that should feel more cathartic than it does.