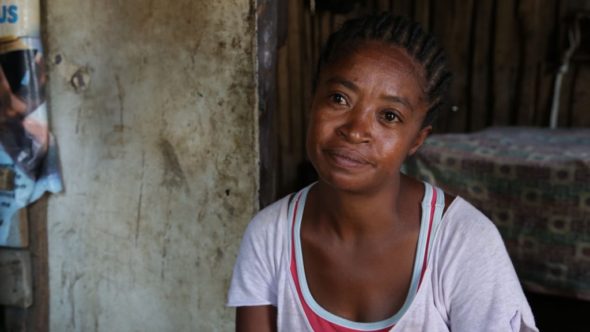 As little Anna tells viewers and her elementary school classmates, Madagascar is the 4th largest island on earth, and likely the single poorest country. Ninety three percent of Madagascar lives on less than $2 a day and half the population is children.

Beautifully photographed and expertly edited, Madagasikara introduces you to a world you just didn’t know existed—one that’s never been site to war and yet grows more ravaged by poverty daily. It’s a world where breaking quarry rocks with hand tools offers the most stable occupation, for as long as your body holds out. The world of this film is one so impoverished it may as well be medieval—part of a long forgotten period where a family’s best hope for the survival of their children is the convent.

For all the destitution, Cowan’s film is surprisingly joyous at times, primarily because of the beautiful little faces surrounding the three mothers—Deborah, Tina and Lin—that are the documentary’s main focus. It’s hard to watch so many sweet, cute children and not feel joy.

Their pain is also more punishing.

A decade of botched elections put the island nation at the center of a tug of war between a millionaire looking to exploit what he can for his own gain (sounds familiar) and a pro-military dictator even less interested in the wellbeing of his citizens. It also put Madagascar in the crosshairs of a global community more focused on sanctioning its leaders than in feeding its population.

Wisely, Cowan humanizes the tale of strife by dropping us into the day-to-day of three different women. Their struggles, joys and heartaches breathe life into statistics that could otherwise overwhelm, their resilience and their frailty speak powerfully to the human condition.

Subscribe in a reader
← Screening Room: My Spy, Irresistible, Eurovision and More
Swing Time →
Scroll Up