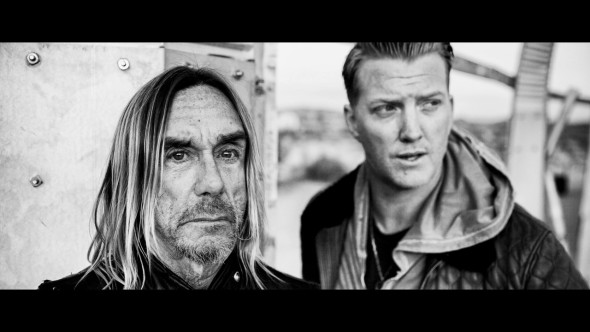 An aging musical icon wants to end his career on a fresh note and reaches out to an esteemed industry powerhouse to help him.

A modern master gets a text from his childhood hero, reminding him in a rush of all that informed the direction of his life.

In what could easily have been a simple marketing tool – a documentary to support Iggy Pop’s last album, Post Pop Depression – American Valhalla instead offers a look at the creative process. But, more than that, it’s a glimpse into the kind of rock star adoration we’ve all felt, and an image of the all-too-human object of that worship.

In this case, the adored is punk rock godfather Iggy Pop; the adoring, Queens of the Stone Age front man Josh Homme, (who also co-directs).

Reading directly from their own journals written during the planning, recording and touring process, Homme, Pop and the rest of the band narrate the clashing emotions, nerves and anxieties that fueled this partnership and the ensuing album and tour.

Pop, now in his late sixties, is a small, crooked, humble guy, and still every bit a spectacle. His raw, unpredictable humanity is etched in the deep lines and huge eyes that haunt his famous face.

Homme – every inch Pop’s physical opposite, tall, sleek and handsome – opens himself up on camera in a way that’s disarming. Between Pop’s honest humility and Homme’s almost paralyzing adoration, the film somehow strikes a deeply sweet note. It’s validation for the overwhelming awe your own personal heroes can inspire. At the same time, it’s a touching reminder that even our heroes are deeply human.

The music also happens to be outstanding.

Most surprising may be the film’s sweet, open heart. It’s a mash note for fans – all fans, but particularly Iggy Pop fans. If this is, indeed, to be Pop’s final hurrah, it is a lovely way to go out.

Subscribe in a reader
← I Don’t Want to Go Out – Week of July 11
Fright Club: Maybe a Vampire →
Scroll Up