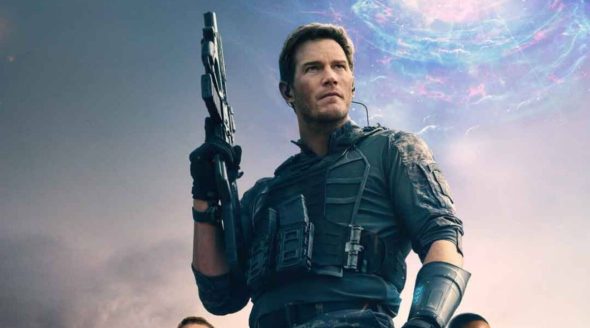 With a prelude this reminiscent of Edge of Tomorrow and a catalyst that recalls Nolan’s The Dark Knight Rises, The Tomorrow War makes itself clear early. This is not going to be a terribly original movie.

Dan Forester (Chris Pratt) is a high school science teacher who believes he was destined for more important things. His opportunity arrives when future earthlings show up to recruit present-day earthlings to fight a battle against the end of the human race.

Some important questions to answer. What is going to be the end of us?

Do we get to see them?

How do they look?

Nasty as hell! Dude, the teeth and these tentacle things—nice!

And finally, why is this movie so long?

While there is no clear answer to that, it appears that director Chris McKay is a big fan of Roland Emmerich, Michael Bay, maybe Stephen Sommers. The film emits a throwback vibe, conjuring popcorn munchers of the late 90s—which is about the era when self-indulgent directors started making 2 ½ hour mindless Sci-Fi.

That’s not all bad, right? The film’s logic may be a bit sketchy, but its professed love of science makes up for a lot of that. Naturally, there are also syrupy family dramatics to drive the narrative, because we all remember Emmerich’s 1996 epic Independence Day.

Also, while many of the internal action sequences feel theme-park stagey, the outdoor set pieces are a blast.

Films like this don’t call for master thespians. Good thing, because Pratt, who also executive produces, doesn’t bring any real depth of emotion to the role. Luckily, J.K. Simmons cannot give a weak performance, so the bruised masculinity and daddy issues have somewhere to take root.

Lose an hour and The Tomorrow War is a pretty fun time-waster, but nothing more. Writer Zach Dean doesn’t say anything new and McKay certainly doesn’t find any fresh ways to say it. But if you miss the bloated, 2+hour action/adventure flicks of the late 1990s, The Tomorrow War is your movie.