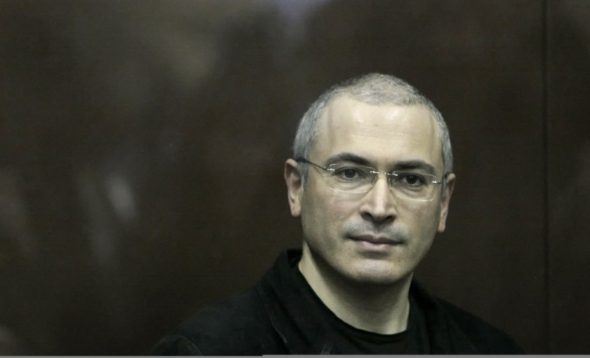 And “K” is the crux of his film: one Mikhail Khordokovsky. Once known as perhaps the richest man in Russia, Khordokovsky spent ten years in a Siberian prison as a political prisoner.

To understand the situation, it helps to understand modern Russian history. Cramming thirty years of that history, from the fall of the Soviet Union to the present, into one two-hour documentary is no easy feat. Many times, it’s hard to keep track of the people and names who appear on screen. Gibney does his best to help us keep up, but he isn’t unnecessarily focused on it.

If you’re not already well-versed in Russian history and politics, trying to follow everything may at times be distracting, but Gibney (Taxi to the Dark Side, Enron: the Smartest Guys in the Room) always manages to keep the film engaging. It moves at a brisk pace, covering the thirty plus years of history and Khordokovsky’s rise as one of Russia’s oligarchs, in the first hour.

Though “Citizen K” is the film’s core, it’s impossible to tell Russia’s story, and Khordokovsky’s story, without taking a hard look at Vladimir Putin.

Putin’s rise was meteoric, a virtual unknown when an ailing Boris Yeltsin resigned and Putin succeeded him as president. Detailing Khordokovsky’s role in that succession is one of the film’s greatest strengths.

Gibney portrays the many grey areas when talking about individual involvement in black and white historical events. Is Khordokovsky a “real-life gangster” as many claim? Or is he a “hero for the cause of human rights?” Perhaps a bit of both.

Wisely, Gibney never absolves Khordokovsky of his past. Though many of the crimes for which he was accused and convicted were possibly exaggerated or even fabricated, his hands are not clean. His involvement in Russia’s economy, and in its history, is a mixed bag. Were his business decisions in the best interest of the country or did they serve his own greed?

Though there are questions left unanswered, the documentary shows Khordokovsky trying to make amends. His focus on transparency, and on an open Russia, is commendable. His attempts to bring to light the layers of conspiracy and violence surrounding Putin is dangerous, and he knows it.

Will Khordokovsky succeed? Only time will tell, but with the 2020 vote fast approaching, Gibney hopes his audience is paying attention.