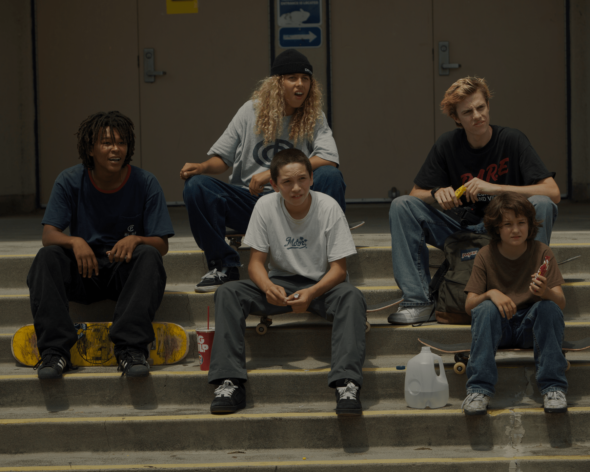 More than just a time stamp, Mid90s emerges as a completely engaging verite-styled slice of place and person, a clear-eyed and visionary filmmaking debut for writer/director Jonah Hill.

While not strictly autobiographical, the film is Hill’s rewind button back to the Los Angeles skateboarding culture so omnipresent during his own coming of age.

13 year-old Stevie (Sunny Suljic) watches a tight knit group of skaters in his neighborhood, envious of the camaraderie missing from his life at home with an angry 18 year-old brother (Lucas Hedges – impressive yet again) and a self- absorbed 36 year-old mom (Katherine Waterson).

Stevie hangs around the skate shop until the boys slowly welcome him with a brand new name: “Sunburn.” With that, Ray (Na-kel Smith), “Fuckshit” (Olan Prenatt), “Fourth Grade” (Ryder McLaughlin) and Ruben (Gio Galicia) become Stevie’s new family, instantly giving him the sense of belonging and male role models he is craving.

Though the film does feel like a labor of love for Hill, it’s not draped in undue nostalgia, but rather a gritty sense of realism resting comfortably between 1995’s “Kids” and Bing Liu’s current skateboarding doc “Minding the Gap.”

The group of skaters moves like an animal pack, and Suljic (Killing of a Sacred Deer, House with a Clock in Its Walls) perfectly captures the attentive innocence behind a young boy grasping at masculinity.

The group of actors in Stevie’s skater family boast little screen experience but are long on authenticity. Smith and Prenatt especially impress as Ray and Fuckshit, two lifelong friends slowly moving in different directions. When Ray quickly and gently admonishes Stevie’s behavior, it is a touching moment that rings with genuine concern borne from experience.

Hill treats his characters with equal trust, presenting their lives without judgement, apology or condescension. He’s equally confident is his mechanics, crafting the film with abrupt cuts, a fluid camera and alternating blasts of sound and silence that help define the mood of longing masked by bravado.

An often funny, sometimes startling and endlessly human film, Mid90s is a blast from the past that points to a bright filmmaking future for Jonah Hill.