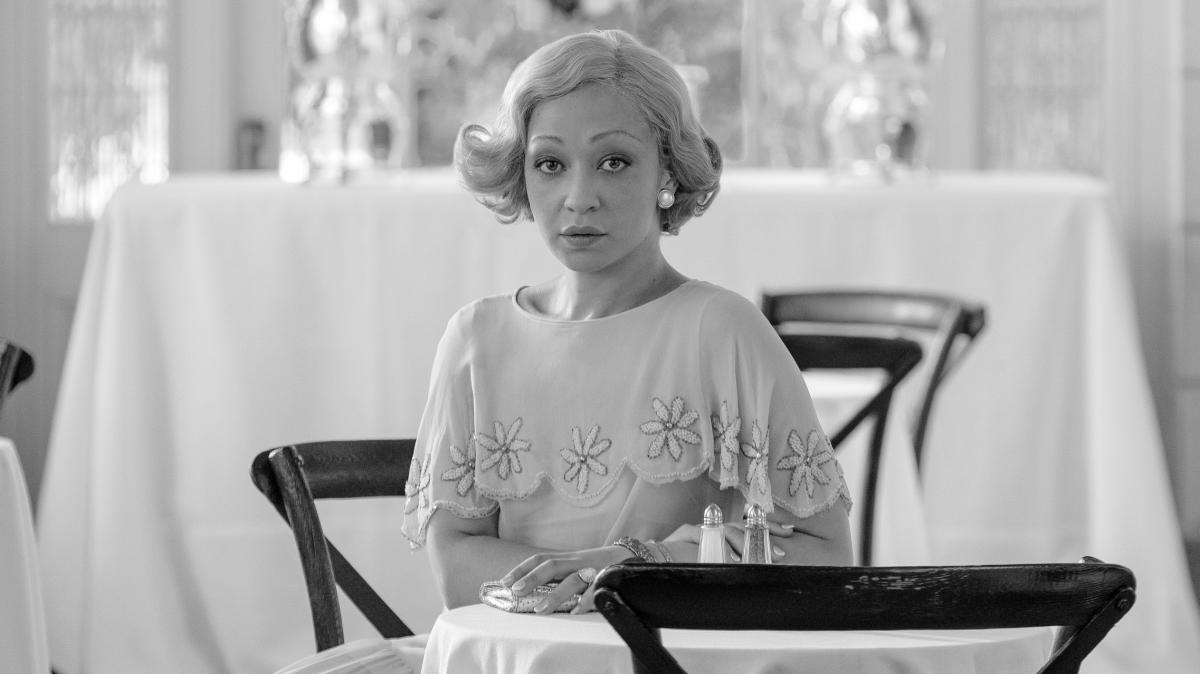 Making her feature debut behind the camera, Rebecca Hall adapts Nella Larsen’s 1929 novel about women unable to find a place to truly belong. The film is Passing, and Hall mines Larsen’s insight and longing to produce a visually stunning, melancholy period piece.

Filmed appropriately and gorgeously in black and white, Passing transports us to the Harlem Renaissance. Irene (Tessa Thompson), wealthy wife of a doctor, pulls her fashionable hat down a little over her eyes and shops in upscale, very white boutiques looking for the book her son must have for his birthday.

She then cautiously risks an afternoon tea in a high-rent bistro, intrigued but terrified of being discovered as she passes for white. A familiar laugh rings through the room and Irene is recognized, not by angry white faces, but by an almost unfamiliar blonde — high school friend Clare (Ruth Negga), whose entire life is built on the falsehood Irene only flirts with for an afternoon.

What follows is a relationship fraught with anxiety, envy and yearning as two people consider what might have been and what might still be, depending on how they position themselves in the divided racial culture of 1920s NYC.

The languid beauty and comment on class play like a more delicate take on Gatsby, Hall subtly drawing attention not only to the racial divide but to the socioeconomic divide within Irene’s own home and life. Never showy, never heavy-handed, the film’s themes prick at the audience just as they slowly, cumulatively wound Irene.

Thompson delivers an introspective performance unlike anything thus far in her impressive career. A great deal of Irene’s arc plays across Thompson’s face, but an early, cynical burst of laughter and other small gestures speak volumes as Irene’s satisfaction with life drains away.

Negga is superb, just incandescent and haunting as a damaged, elegant survivor. For all her glitter and glamour, Clare haunts the screen. The tenderness between the two characters haunts, as well, delivering a sorrowful tone at odds and yet in keeping with the glorious, snow-globe-esque set design.

Hall might seem an unusual talent to deliver such a richly textured examination of the Black experience in America, but she took inspiration from her own grandfather, a Black man who passed for white. Whatever the background, the result is a meticulously crafted, deeply felt gem of a film.