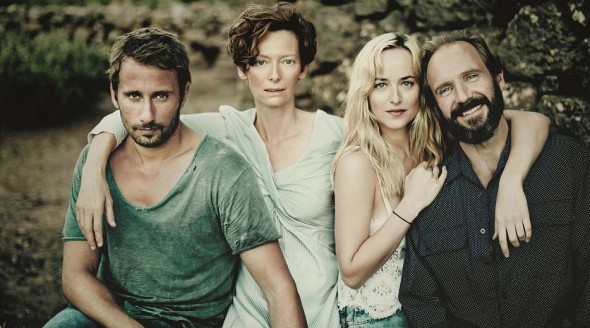 Remember that infamous high school math problem about the trains? You know, the one where two trains leave different cities heading toward each other and you are tasked with discovering when and where they collide?

A Bigger Splash is a lot like that, only instead of trains we are dealing with ex-lovers and the location of the collision is a gorgeous volcanic island off the coast of Italy.

Rock star Marianne Lane (Tilda Swinton) is on vacation, recovering from throat surgery with her studly younger partner Paul De Smedt (Matthias Schoenaerts), when they are interrupted by unexpected houseguests: her ex-lover and producer, Harry (Ralph Fiennes), and his recently-discovered, lascivious daughter Penelope (Dakota Johnson). It’s clear that Harry still carries a torch for Marianne. It’s also apparent that he is more than willing to use the close quarters to fan those flames into obsession.

A catastrophe is inevitable. It’s just a matter of time — which, in this film, can tend to drag a little bit. This is not just a movie about nostalgic characters. With its long takes and dramatic score, director Luca Guadagnino’s film itself demonstrates a palpable longing for an earlier cinematic age. But with the stellar cast, breathtaking setting, and stylish costumes, the extra length, like a spare tire on an old flame, is easy to forgive. There is something beautiful in nearly every shot.

Schoenaerts and Johnson deliver solid performances in their somewhat underwritten characters (disdainful melancholic and crafted nymphet, respectively). Fiennes and Swinton, however, are delightful contrasts. Fiennes very nearly steals the show with his frenetic outbursts of verbal diarrhea — and in the scene where he dances to the Rolling Stones, he does. However, in the end this is Swinton’s movie. The layers of emotion she manages to convey with minimal dialogue is what truly makes the biggest splash.