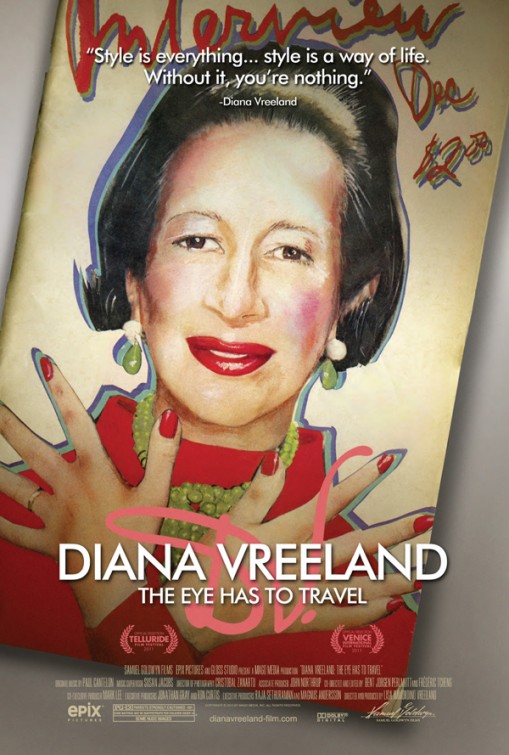 We’ve got a couple wild documentaries For Your Queue this week..

If you don’t know much about Diana Vreeland, picture the possible female inspiration for famous beer pitchman The Most Interesting Man in the World. Vreeland’s answer to most every question would begin with “Good God!” before regaling all with stories of rhino hunting or the time she saw Hitler, and then letting loose with some unexpected exclamation.

Diana Vreeland: The Eye Has to Travel documents her globe-trotting childhood (“hideous..and maaahvelous!) and eventual career as the longtime fashion editor at Harper’s Bazaar, editor-in-chief at Vogue, and all-around influence on fashion and popular culture.

Co-directed by granddaughter-in-law Lisa Immordino Vreeland, Diana’s story is told through interviews, archival footage, and transcripts from a meeting she held with writer George Plimpton to discuss her memoirs. Together, they paint a completely entertaining picture of a strong woman who embraced independent thinking and lived a determined life of unapologetic originality.

Appreciation for the film may actually increase the less you know about Vreeland, as you giddily discover a true visionary. The Eye Has to Travel is a wonderful reminder of the vibrancy of her work, and her exuberant zest for life.

For an even wilder true life account, look into 2007’s Crazy Love, a tale of obsession, maiming, prison rot, and finally, marriage. Burt Pugach served 14 years in prison after hiring thugs to throw lye in the face of Linda Riss, the young woman who’d spurned his love after finding out he was married. They later married.

This is not even the end of the story – more nuttiness follows. And it is so plainly stated that it feels inevitable, acceptable, and disturbing all at once. Burt Pugach (who passed away a few weeks ago) set out to ensure that no one else would ever possess his Linda, and he succeeded. Yet somehow these horrifying turns of event are made almost charming by her cantankerous